Nitrogen is very important for plant growth and can be added to soils in fertilizers or by lightning. It is a colorless and odorless gas. By volume, Nitrogen makes up 78% of our air. We obtain it from liquid air and approximately 45 tons is produced each year. Nitrogen is found in all fossil fuels. Nitrogen cycles in nature by all living organisms through what is called the “nitrogen cycle”. Green plants and algae take it up as nitrates. It is then used to construct DNA, RNA and amino acids, which are the building blocks of proteins. Animals get their nitrogen by eating other living things. The nitrogen is digested and then reformed for their own needs.

?When the animals die microbes in the soil turn the nitrogen compounds into nitrates that plants reuse. The supply is also restored by bacteria that “fix” nitrogen into the atmosphere.

Crops benefit greatly by adding nitrogen rich fertilizers into the soil. Adding nitrogen must be done carefully because the run-off into streams, rivers and lakes can cause algae to grow too quickly which blocks lights. Without photosynthesis, the oxygen in the water is depleted and the streams, river and lakes will die. 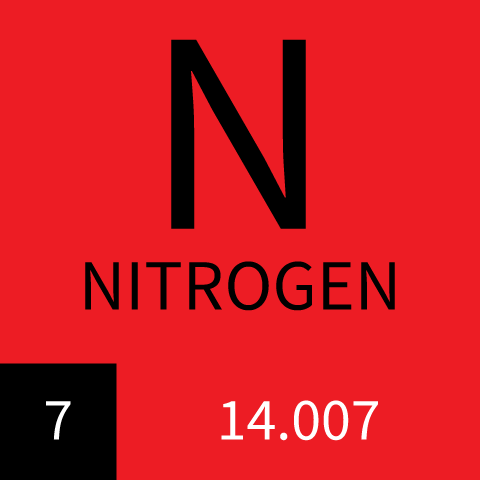